There are a lot of places to eat in Orlando. Everything from fast to fancy food. We stay in our timeshare, and if we’ve spent the day in a theme park, it’s nice to come back to the “house” and eat in.

But, we do eat out a few times on every trip. Most lunches, some dinners. Here are some of our favorites from our last trip.

Universal City Walk: Bubba Gump’s Shrimp Factory has a great kid’s menu, plus they serve the food in neat little boats. Awesome margaritas, which come in handy if you’ve spent the most of the day in one theme park, and will be going to another after your late lunch.

On past trips we’ve eaten at the Nascar Cafe, which is great fun for stock car aficionados, but the atmosphere is a bit loud.

Downtown Disney: Every trip to Orlando, we almost always end up at Fulton’s Crab House. Terrific service. Terrific seafood. Terrific Bloody Mary’s. On our last visit, we ate quite late (9 pm)  so Dave and I split the cold seafood plate appetizer.  I had a few oysters to start and he had the crab cake appetizer. More than enough food.  Douglas had fish, which he loves, and my older niece tried King Crab for the first time. Pricey, but well worth it for your family splurge dinner. ALL the restaurants at Downtown Disney have similar meal prices, so you might as well go for what you want.

For lunch the day we were flying home, we tried the new restaurant, T-Rex. Very similar to Rainforest Cafe, including gift shop at the exit and a regular “show,” but with a dinosaur theme. Douglas was quite impressed with the geodes scattered through the restaurant. I thought the food was pretty good, and recommend the fish tacos. Service was excellent.

Other restaurants at Downtown Disney that we’ve eaten at in past  years, and recommend: Bongo’s Cuban Cafe, Cap’n Jack’s and the House of Blues Gospel Sunday Brunch. 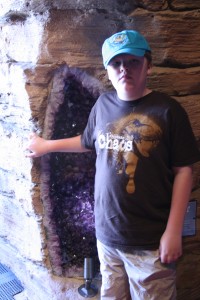 Doug at T-Rex in Downtown Disney