One of the many claims to fame of the Buffalo National River area is the lack of modern development.  There are no hotels or chain restaurants in the immediate area.  Nature is the most important resident and for people who want to enjoy the great outdoors, this is the place to be!  The trees and brush were such rich shades of green.  The trees were so thick and dense that Dennis wouldn’t even send the boys into the woods to get firewood, knowing they’d return with nothing but ticks and jiggers…if they returned at all!

I thought about many ways for us to pass the time in Arkansas.  We could visit this quaint little village we passed about ½ hour outside the campground.  There were several hiking trails for us to explore.  The boys wanted to fish ever since we missed our opportunity in Montana.   Our campground neighbors told us the best fishing was just off the bridge about 5 miles down the road.  I must have been really tired that morning because 5 miles seemed so far away!  The fact of the matter is that neither of us really wanted to drive anywhere.   I was tired of hearing that one can of baked beans hit the cabinet door with every corner.  With 85% of the trip done, we had clocked an unbelievable 6500 miles but that extra 5 miles just seemed over the top.  We really wanted to do absolutely nothing.  So that’s what we did – nothing! 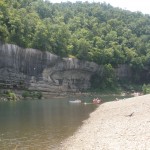 Floating on the lazy river

Our campsite was only a stone’s throw from the river’s edge.  Dennis took the boys, the chairs and the fishing gear to a small beach area right around the corner.  I took my time, pretending to do something productive like read or write but it was 85 degrees and humid.  I’m no dummy.  I put everything away, put on my bathing suit and met my men for a day of nothing.   The river was calm, the sun was hot and the water was refreshing.   For a while, we had the whole beach to ourselves. The kids were in their glory to break out the fishing poles one more time.  After an hour of trying their luck the traditional way, the boys channeled their inner Survivorman and tried to catch fish with their hands.  One guess on how that turned out!

The rest of the day was just more of the same – swimming, fishing, snacking, chatting and sunning.  Repeat.   By late afternoon, we were so relaxed we knew we had to move soon or we’d never have the strength to make it back to the camper.  We took the traditional slow pace of the south to a whole new level. It took us at least 4 hours to shower, dress and have dinner.   As we all know, the only way to top off a day like this was with a campfire, s’mores and a bottle of wine.  We were nearly comatosed by 9 o’clock.  When the boys went inside to play video games, the contentment level of the family had peaked.  Still committed to our nothingness, Dennis and I stayed in the same spots we planted out butts after dinner.  The night was so dark it was impossible to see 2 feet beyond the fire.   The sounds of the tree frogs and crickets played like background music.  I closed my eyes to take it all in when suddenly I heard a noise like I’ve never heard before.   Now, I have not been face to face with a mountain lion or cougar or any big, ferocious, wild cat that could rip you to shreds with one swipe of a paw but trust me when I tell you the sound is unmistakable!  It was loud.  It was close.  It was pissed off.  And I was outta there!  The past 12 hours of pure relaxation were erased in seconds flat as I flew off my ass and hauled to the safety of the RV.

As a teen, I was a huge fan of the slasher movies, not for the fear factor but the absurdity of them made me laugh.  But for the first time in my life, I could relate to the useless victim who tripped 5 times running into the barn or the guy who couldn’t turn the car keys in the ignition before the hatchet hit.  In less than 5 feet, I almost knocked over a chair with Dennis in it, hit the picnic table, tripped over the extension cord and fumbled miserably trying to open the RV door.  True to the horror movie ritual of my youth, there was a least one audience member laughing their way through the whole scene.  Still cracking up when I reappeared from the RV a couple minutes later, Dennis told me he had never seen me move that fast!  We heard the cat roars in the distance a few more times but there was no recovering.  I spent the rest of the night inside with the kids.  Dennis enjoyed the fire just a bit longer before it started to rain.  It rained all night and well into the morning.  Packing up in the rain was no fun.  Our day of nothingness was officially over and it was time to head out to Tennessee.