What is it about Abbot and Costello’s classic routine “Who’s On First” that makes it so funny no matter how many time you see it?  At the Baseball Hall of Fame in Cooperstown NY, you could hear the laughter of baseball fans echo through the halls while the legendary comic team banters back and forth as the frustrated Abbot tries to figure out who is on first.  Like baseball, it’s just classic. 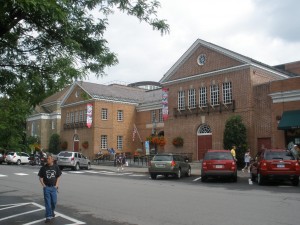 And classic is how I would describe our first day of vacation in Cooperstown.  Main Street looked like something out of a Disney movie that was written and directed by the kind of guy that wears team logos 24/7.  You couldn’t spit without hitting someone or something wearing a baseball logo, including me.  And, as a Red Sox fan, it was just a tad painful to see Yankee memorabilia was the focal point of most window displays.  Since Cooperstown is in NY I guess it’s understandable.  Even with all that testosterone, it couldn’t take away from how pretty and clean and charming the town and the people were.

The Baseball Hall of Fame blended in perfectly with the surroundings – red brick exterior with tasteful banners of the 2009 inductees including Boston favorite Jim Rice!

Like my brother and sister, I became a baseball fan at an early age thanks to my Dad, an avid sports lover.  The difference is my siblings and I could never be persuaded over to the evil empire and have always routed for the Red Sox against my Dad’s Yankee loyalties.

Like the town itself, it was the history of the game that was in the forefront of this long-standing museum, not the glitz.   The struggles of players like Jackie Robinson and others from the Negro league who stood tall against hatred and ignorance were told with such honesty.  The glory of legends like Babe Ruth, Mickey Mantle, and Ted Williams were showcased for fans to walk through history.  Every turn offered something new and interesting to see.

We saw not one but three “Screwballs”, Abe Lincoln and the “Holy Cow”. 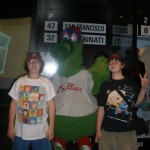 Which one is the real Screwball? 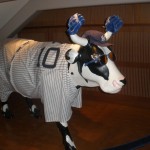 As a Bostonian, I couldn’t stop staring at Curt Shilling’s bloody sock from the 2004 playoffs when the Sox came back from a 3-0 deficit to beat the Yankees and go on to win the World Series.  Sorry, just a moment to gloat…

The story never gets old!

Even with all those historical moments to revel in, they didn’t match up the feeling I got when I entered the records room.  You knew instantly where to find the plaques of Mickey Mantle, Ted Williams and Babe Ruth by the small gathering of folk pointing and telling stories or by one of my family calling out “Hey!  Look over here!”  Personally, I made a bee-line for Carlton Fisk. 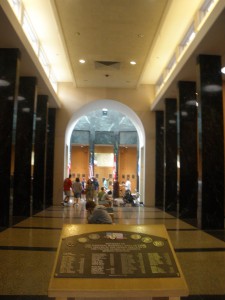 My only regret is that we didn’t allot enough time to stay in the quaint and picturesque NY town for an entire afternoon.  It was a great way to start the trip.

Next stop Sullivan OH to visit our friends.