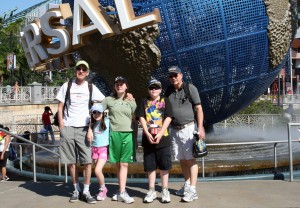 Uncles and Cousins at Universal Orlando

Now that Douglas is older, we tend to prefer the two Universal parks in Orlando —  Islands of Adventure and Universal Studios. Even when the rides are similar to ones at Disney parks — for example, the Bilge Rat Barges at Islands and the Kali River Rafts at Disney’s Animal Kingdom, the Universal versions seem longer, more intense. We also really like Universal’s Express Passes. Yes, they cost more money on top of the park admission, but you are guaranteed a shorter line, ensuring that you get more out of your day at the park.

Universal Studios was modeled after Universal Studios in California, but it goes well beyond the back lot tour I remember from my last visit to the original when I was pregnant with Douglas 10 years ago. Nevertheless, its attractions tend toward backstage tours and indoor rides like motion simulators.  It also presents as a single studio “backlot.”  Because so many of the rides at Universal Studios are indoors, it is a good choice for an overcast, even rainy day. Islands of Adventure is more of a traditional amusement park that loosely uses the Universal properties as themes. Each island is also very distinct in appearance. That said, the company seems to be mixing it up a bit, as the two attractions under construction at the moment are Harry Potter, scheduled to open at Islands in 2010, and a new roller coaster at Universal Studios opening later this year.

The Simpsons and some shady characters

The big hit this year was The Simpsons Ride. As you can see, the kids even consented to have their picture taken with the characters. Luckily, we got there early enough there was no line, which made the adults with cameras very happy.

The Simpsons Ride replaces the Back to the Future ride, and has a similar “big chase” premise. You don’t need to be a fan of the show to enjoy the ride, but it helps if you know at least a little about the franchise.  You’ll never look at a pacifier the same way again.

The other ride at Universal truly worth a long wait is the Revenge of the Mummy indoor roller coaster. I love roller coasters, but I can’t stand the thought of being turned upside down or having my feet dangle. Forward, really fast, scary. All fine. Upside down. Bye bye. Revenge has everything I like, and nothing I don’t.

Other favorites at Universal: ET Adventure (be sure to listen closely at the end of the ride), Men in Black, Jaws and Shrek 4-D. Jimmy Neutron is good, but unless you’re with rabid fans of the show, Simpsons and Shrek 4-D are better and far more worth the wait. Disaster is fun, but LONG, and younger kids may get bored.