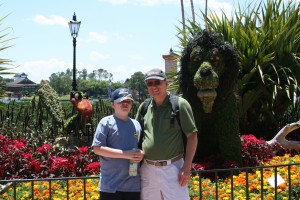 Originally Walt Disney’s vision for the Experimental Prototype Community of Tomorrow,  Epcot is a schizophrenic mash-up of technology and culture. The front of the park is devoted to the future, with the giant golf ball of Spaceship Earth as its centerpiece. The rear of the park, World Showcase, is a series of pavilions devoted to the culture and customs of 11 nations.

The park has rides — some very good ones in fact — but the real focus is on learning and discovery, which makes it a terrific break from the more frenetic theme parks.

Typically, the World Showcase opens, and stays open, later than Future World at the front of the park, so while  I usually recommend starting at the back of a park and working your way forward to the exit, that strategy doesn’t work at Epcot.

One last word about Epcot in general. Nearly everything — rides too —  is sponsored by a company, country or organization. In a way, this was part of Disney’s original concept; EPCOT would be a proving ground for the development of new technologies. That was the theory anyway.

In practice, it seems far more promotional, but don’t be fooled. Underlying many of the exhibits at Epcot, especially in Future World and The Land, you will actually find a real connection between promotion and the progress of knowledge.

Most guidebooks suggest not doing the Spaceship Earth attraction first, but the line moves pretty quickly. While we waited, my husband ran ahead, got FASTPASSES for Mission:SPACE and then joined us in line. I sort of recalled  Spaceship Earth from a visit about 10 years ago, but they’ve added a new interactive ending that makes the ride really worthwhile. 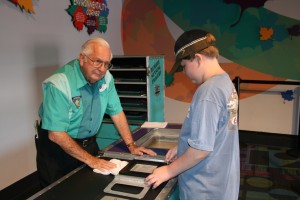 The balance of Future World is very similar to a good science museum, with interactive exhibits like making paper (at left.)

And then there’s Mission: SPACE. This ride has lots of warnings. Among them, if you suffer from motion sickness or claustrophobia, don’t ride. In previous years, I had avoided this ride for those very reasons, but this year, in an act of gross stupidity, I went ahead. How bad could it be? It’s just a ride.

Well, I am here to tell you, it was that bad. For me, that is. Everyone else in the family loved it, but I started to panic the minute they closed us into the capsule and it got worse when the motion sickness kicked in. Seriously, if you are claustrophobic, DO NOT go on Mission: SPACE. Take everyone’s admission cards, go over to Soaring and get the next set of FASTPASSES for your party. Or if you go at the right time of year, as we did, and the International Flower Festival is on, enjoy the sculptures. Anything but Mission: SPACE. CLAUSTROPHOBICS, STAY OFF THAT RIDE. YOU HAVE BEEN WARNED. 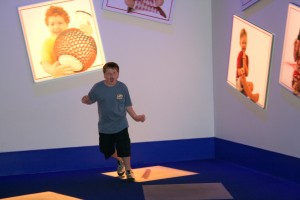 The Land, the area where you’ll find Figment, Soaring and the Aquarium, including the great Turtle Talk with Crush show, is off to the side of Future World. These are three of the best attractions in Epcot, so don’t miss them.

Soaring takes you on a hang glider tour of California. We’ve traveled pretty extensively in the state, so enjoyed picking out the places we’d been. Turtle Talk with Crush gives kids a chance to “talk” with the character from the film Finding Nemo. Figment, sponsored by Kodak,  focuses on Imagination and at the exit to the ride, there’s a great set of interactive exhibits that lets kids (of all ages) experiment with images and sound. 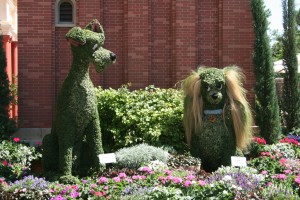 Epcot’s World Showcase has a few rides and theatrical presentations, but it’s basically shops and restaurants designed to give a Disney-approved flavor of each culture. In other words, no le Crazy Horse in France.  It is staffed by citizens of the respective countries through the Cultural Representative Program.

Shops. Restaurants. Educational films. Doesn’t sound too appealing to the average six to 12 year old. Which is where the Kidcots come in. At each country, there is a station, generally to the back of the pavilion so you have to walk through most of the shops, where kids get their “passport” stamped. You can purchase an official Epcot Passport  for $9.95 or decorate a paper mask at a Kidcot and get the stamps along the handle. Or both. It’s a great way to explore the nations.

In January, they opened a new World Showcase activity, the Kim Possible scavenger hunt sponsored by Verizon. We didn’t do it on this trip as the timing wasn’t right. Next time.

The World Showcase is also full of great photo opportunities. Most of the shops sell costumes and have great props;  my son loves to have his picture taken with them. 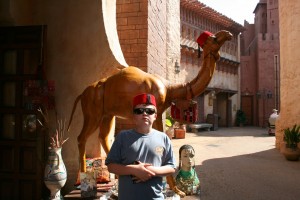